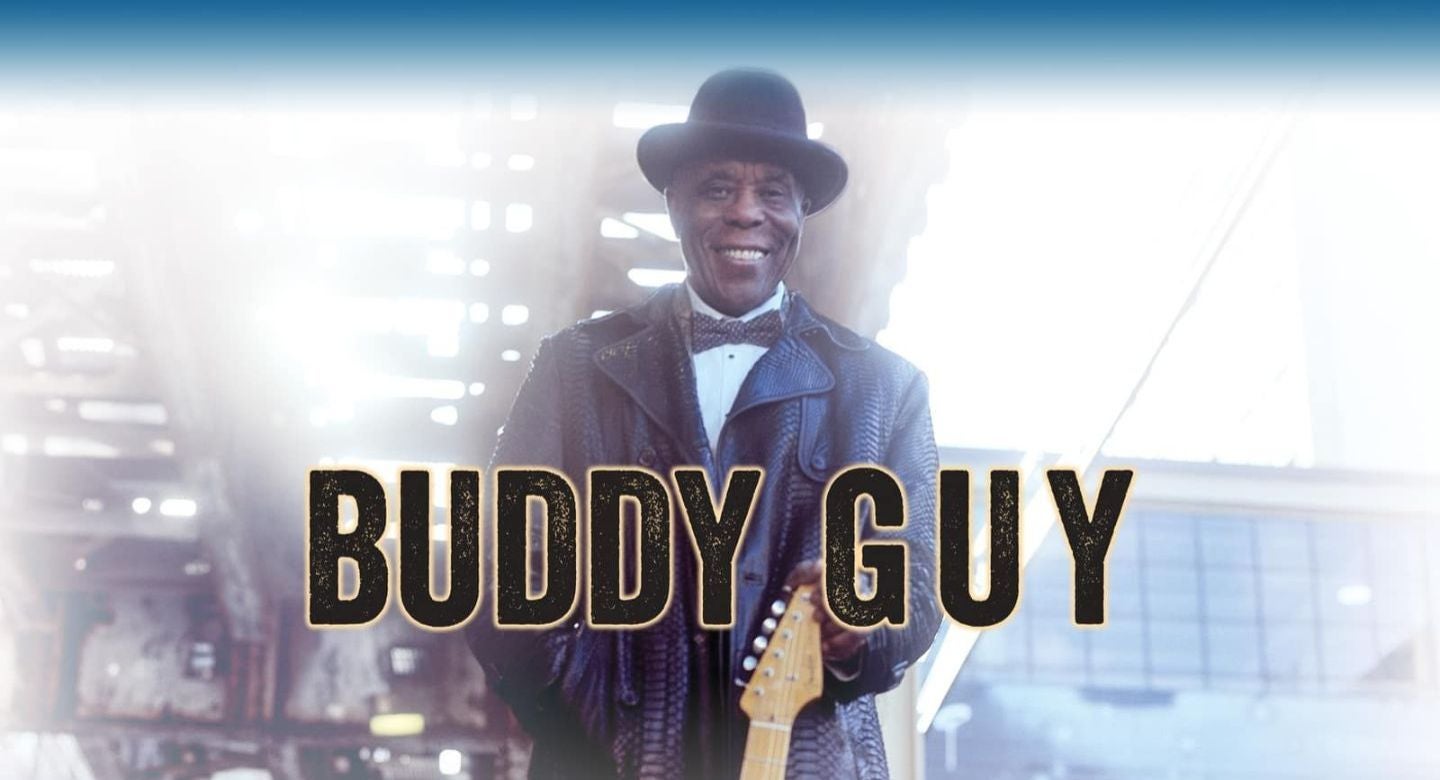 The title of Buddy Guy’s latest album says it all: The Blues Is Alive and Well. The legendary blues artist’s eighteenth solo LP and follow-up to 2015’s Born to Play Guitar showcases his raw and unadulterated sound, its fifteen tracks a true pleasure for aficionados and genre newcomers alike. “I got children and grandchildren who didn’t know who I was, but nowadays we can play outdoor concerts and see kids that are eight, nine, twelve years old coming to me and saying, ‘I didn’t know who you was, but I read what Eric Clapton said about you,'” Guy explains when discussing his mindset around the new record. “I’m always trying to make an album that someone accidentally plays where some kid hears it, picks up a guitar, and helps keep the blues alive.”

And it only takes one listen to The Blues Is Alive and Well to realize that Guy’s mission has been more than accomplished here. The record is arriving on the heels of a spate of high visibility for the 83-year-old performer: at the 2016 Grammys, he picked up a trophy for “Best Blues Album” honoring Born to Play Guitar, and that same year he hit the road for a U.S. tour opening for Jeff Beck. In addition to bringing the house down for a recent sold-out performance commemorating the closing of New York City’s B.B. King’s Blues Club and Grill, he recently appeared on David Letterman’s Netflix talk show My Next Guest Needs No Introduction. A truly restless and energetic performer, The Blues Is Alive and Well is the latest triumph in an already-legendary career.

And even as Guy pushes forward with his astounding career, he’s careful not to forget his late contemporaries who inspired him along the way. “I went to sleep yesterday and woke up and all the great blues players are no longer with us. Muddy, Wolf, B.B.—they’re all gone. Before they passed away, when they were in their prime, we used to have a drink and a laugh and talk about how when one of us is gone, the others have to keep it going. I’m trying to do something to keep this music that I love so well alive.” And with The Blues Is Alive and Well, it’s clear that the music—and Guy himself—ain’t going away anytime soon.

You know all the hits 🎵, so why miss a chance to see them live? Dirty Dancing in Concert is the classic film’s FIRST live film-to-concert experience - right here in Tysons, VA. Sing and Dance With Us ➡️ Tix @ Link in Bio #DirtyDancing #DirtyDancingInConcert #CapitalOneHall #TysonsVA #LiveMusic #Concert #80sMusic @dirtydancingmovie @lionsgate
Hey! Visit us THIS SUNDAY for a cabaret celebrating music from the jazz era! Join the Gay Men's Chorus of Washington, DC as they salute the "Great American Songbook" paying tribute to the music of African American artists and composers from the early 20th century. Tickets and Info ➡️ Link In Bio @gmcwashington #GMCW #TysonsVA #DMV #DC #LGBTQ #CapitalOneHall #LiveMusic #cabaret
Join us for DIRTY DANCING IN CONCERT, the classic film’s first live film-to-concert experience. Enjoy the digitally remastered hit film like never before on a full-size cinema screen, with a live band and singers performing the film’s iconic songs. With a soundtrack that marked a generation, DIRTY DANCING IN CONCERT promises to bring a thrilling new and unique experience to the 80s classic. Directly following the film, the band and singers will throw an encore party that will surely take you back to the time of your life as you sing and dance along to your favorite Dirty Dancing songs. Immerse yourself in the timeless romance and experience one of the most memorable movies of the past 35 years - now live! Hurry! Offer expires Thursday, June 23 @ 11:59PM. Tickets go on sale to the general public Friday, June 24 @ 10AM Link for Tickets in Bio! @dirtydancingmovie #DirtyDancing #Concert #CapitalOneHall #Tysons #VA #DC #DMV
Just Announced 💄 @scottbarnescosmetics Makeup Masterclass (11/7) For the first time ever, Scott Barnes, makeup artist to the stars and creator of the famous "JLo Glow" will be in Washington, DC for an exclusive makeup masterclass. More Info ➡️ Link In Bio Presented by @axelmakeupacademy #CapitalOneHall #TysonsVA #Makeup #MakeupTutorial #MakeupMasterclass #ScottBarnes #JLo #JLoGlow #VA #DC #DMV
Just Announced - @babbumaaninsta (7/31) Don't Miss Your Chance to See This 'Best Indian Live Act' winner in Concert at Capital One Hall! More Info ➡️ Link In Bio #CapitalOneHall #TysonsVA #Tysons #DC #DMV #VA #Show #Concert #Punjabi #PunjabiMusic #PunjabiShow #PunjabiConcert #BabbuMaan #BabbuMaanLive #BabbuMaanInsta #BabbuMann #Punjab #Bhangra #Giddha #Dance #PunjabiBhangra #India #Indian #IndianMusic #Desi #ProudToBeDesi #ProudIndian #Bollywood
COMING UP NEXT... Friday, 6/10 - @natsymphonydc Emanuel Ax Plays Beethoven Sunday, 6/12 - @thedonmclean 50th Anniversary Of American Pie (Use code "TYSONS" at checkout 👀) Get Your Tickets ➡️ Link In Bio #CapitalOneHall #TysonsVA #DonMcLean #NSO #Symphony #Orchestra #LiveMusic #Tysons #DC #DMV #VA #NOVA #concerts
We're honored to share that Capital One Hall was recently awarded this year's Jinx Hazel Arts Award 🏆. We cherish every opportunity to support local arts organizations in pursuit of the Hazel family's mission to solidify the importance of the arts in our community. #CapitalOneHall #TysonsVA #ArtsFairfax #Fairfax #Tysons #community @artsfairfax @capitalonecenter
🎻 Just Announced and On Sale Now 🎻 @iamjenviolin - 9/25 at 4:00PM in The Vault “The Celebration Live Concert is a presentation of classical, jazz, R&B, and hip-hop selections. You won’t want to miss this debut, which will also feature guest performances.” Tickets at the 🔗 in bio! #Jennviolin #HipHop #Classical #Violin #LiveMusic #Concert #DC #DMV #CapitalOneHall #TysonsVA
🎟 On Sale Now - @bozscaggsmusic (8/8) "Music has been a constant companion and I'm feeling more free with it than ever," Scaggs comments. "I feel like I've found my voice through all these years, and I've gotten closer to where I want to be with my approach. Get Your Tickets Today! #CapitalOneHall #TysonsVA #CapitalOneCenter #BozScaggs #BozScaggsTour #Jazz #JazzBand
🎟 On Sale Now - @aaronlewismusic (7/28) With a decade invested in a genre that’s seen him record with George Jones, Charlie Daniels, Vince Gill, and more, he has claimed two #1 Billboard Country Album debuts for his albums Town Line and Sinner. Get Your Tickets Today! #CapitalOneHall #TysonsVA #Country #AaronLewis #AaronLewisTour
Just Announced and On Sale Now 🎟 The McLean Symphony Remembering Juneteenth Concert (6/19) The McLean Symphony is back at Capital One Hall for their Remembering Juneteenth concert - a celebration of Black music and composers. Info and Tickets ➡️ Link in Bio #CapitalOneHall #Tysons #McLeanVA #Juneteenth #Symphony
⭐️ Just Announced ⭐️ @aaronlewismusic - July 28 @bozscaggsmusic - August 8 More Info ➡️ Link in Bio #CapitalOneHall #TysonsVA #AaronLewis #BozScaggs #JustAnnounced
🔥ON SALE NOW🔥 Gordon Lightfoot (7/25) @menatworkmusic (8/17) @wheeloffortunelive (9/23) Tickets and full schedule here ➡️ link in bio! #CapitalOneHall #TysonsVA #GordonLightfoot #MenAtWork #Wheel #WheelOfFortune #TicketSales #OnSaleNow
TOMORROW NIGHT is @whitneycummings HOMETOWN SHOW right here in Tysons, VA! Limited tickets still available at the link in our bio! #WhitneyCummings #TysonsVA #CapitalOneHall #Comedy #Homecoming #HometownShow
JUST ANNOUNCED 🎸 Gordon Lightfoot (7/25) The concert tour will feature his well known hits as well as some deep album cuts for the die-hard fanatics. Tickets will go on sale Friday, May 20, at 10AM. More Info ➡️ Link In Bio #CapitalOneHall #GordonLightfoot #TysonsVA #JustAnnounced #LiveMusic #Folk #FolkRock
Can we buy a vowel? Wheel of Fortune Live! is coming to Capital One Hall on 9/23! Tickets on sale this Friday, May 20 at 10 AM. More Info ➡️ link in bio! #CapitalOneHall #WheelOfFortune #WheelOfFortuneLive #TysonsVA #GameShow #Wheel @wheeloffortunelive
JUST ANNOUNCED ⚠️ @menatworkmusic (8/17) Tickets go on sale Friday, May 20 at 10 AM Men At Work were born in Melbourne, Australia in the middle of 1979 and went on to become a globally successful Grammy winning, multi-platinum selling act, during the early 80’s. More Info ➡️ Link In Bio #CapitalOneHall #TysonsVA #MenAtWork #NewWave #PopRock #ColinHay #DownUnder
🎟 ON SALE NOW 🎟 7/29: @vincegillofficial (Second Show!) 9/16: @werockcancer 10/22: @danielhowell 12/4: Deck the Halls with @disney's @dcappellamusic Tickets and full schedule at the link in our bio! #CapitalOneHall #TysonsVA #DanielHowell #DCapella #WeRockCancer #VinceGill #TicketSales #OnSaleNow
The wait is almost over. Our run of @officermusical starts tomorrow night at 8 PM with performances through Sunday. Check out this action-packed trailer from the show’s 2019 tour in the UK. Tickets ➡️ Link In Bio #BroadwayInTysons #TysonsVA #CapitalOneHall #AnOfficerAndAGentleman #Musical #Theater