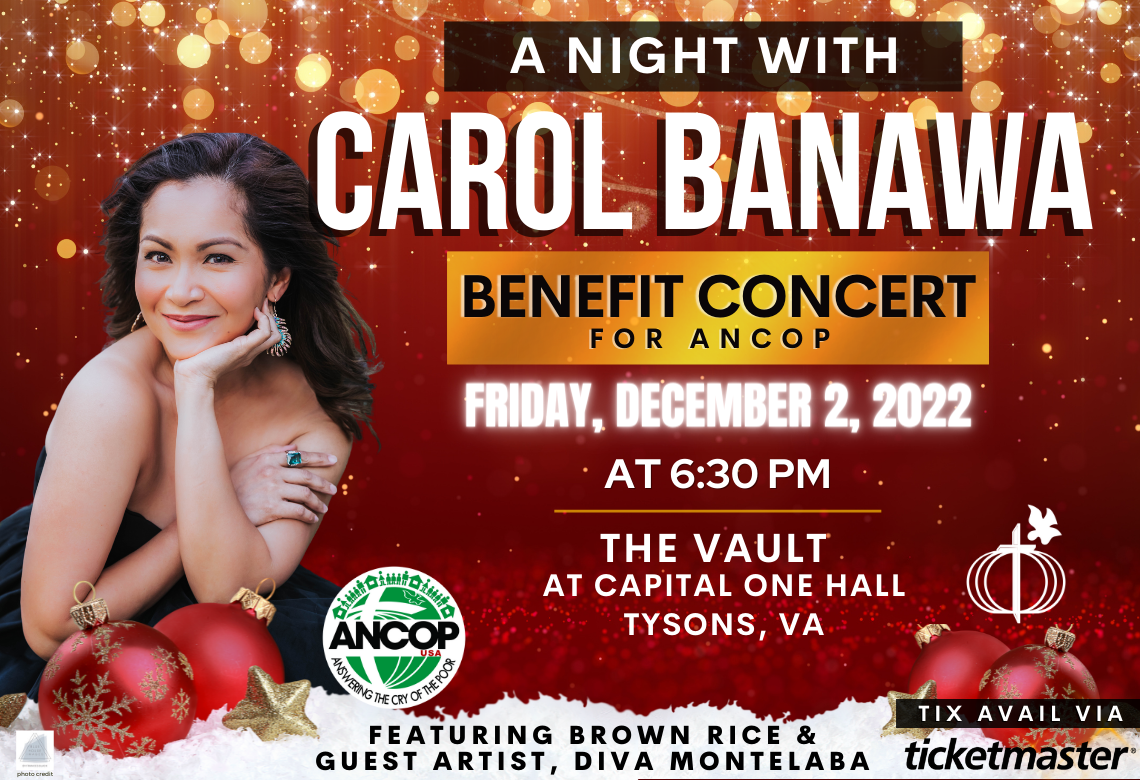 A Night with Carol Banawa

Answering the Cry of the Poor is excited to present Carol Banawa-Crisostomo in The Vault on December 2nd.

The Philipina singer, actress, and nurse commonly known as Carol Banawa was raised in Batangas, she has two siblings, Alexander and Cherry. Banawa started singing when she was a little girl while her family lived in Saudi Arabia. Her family then moved back to the Philippines. There, she was invited to join the new roster of ABS-CBN stars through the children-oriented show Ang TV.

She has performed at the Madison Square Garden in New York City at the 2003 New York Music Festival.

In 2010, she made her comeback in the music industry, and starred in the hit Philippine TV series, Mara Clara, where she sang the opening song of the said TV series. She also covered Till My Heartaches End, the theme song of the 2010 film of the same name.

In 2016, her song "Bakit 'Di Totohanin" was featured in one of the scenes of the U.S. drama series The Vampire Diaries.

On March 31, Rumours, The Ultimate Fleetwood Mac Tribute Show, is coming to Tysons to pay tribute to the great #FleetwoodMac 🎶 Tickets go on sale this Wednesday, Dec. 7 at 10AM 🎟 We are extremely saddened by the recent passing of Christine McVie and look forward to celebrating the life and legendary music she created with Fleetwood Mac at this performance.
#Blippi is coming to Tysons, VA on June 17, 2023 for the ultimate curiosity adventure in Blippi: The Wonderful World Tour 🚛🌈 Dance, sing, and learn with Blippi and special guest Meekah as they discover what makes different cities unique and special! Tickets go on sale this Friday, Dec. 2 at 10AM but you can get early access by subscribing to our newsletter!
Some things are just (orna)meant to be 🎄❄️ Capital One Hall is feeling festive as we come up on the most wonderful time of the year! Head to the link in our bio to snag tickets to one of our many holiday shows coming this season 🎟🙌
What a show 👏 We had a great time hosting #TootsieMusical at Capital One Hall all weekend long & thank you to everyone who came out to see it! So, now #WhaddyaDo? 😉 Check out the rest of our 2022-2023 Broadway in Tysons series at the link in our bio!
The reviews are in ⭐️⭐️⭐️⭐️ and #TootsieMusical is "musical comedy heaven"! Opening Night was last night and you still have 4️⃣ more chances to see this laugh-out-loud love letter to the theater at @CapitalOneHall this weekend! Head to the link in our bio to get your tickets 25% off with code THANKS 🎟
It's Opening Day of #TootsieMusical at @CapitalOneHall 🎭💋 and to celebrate, we're having a Tootsie Takeover! Matt Kurzyniec (@mattk313) from the cast is taking over our Instagram story today bringing you a day in his life 👀 Stay tuned with us all day to check it out + tickets are still available at the link in our bio (get 25% off with code THANKS)!
That full house feeling 💙 #CapitalOneHall
Tickets for 3️⃣ newly announced shows coming to #CapitalOneHall are on sale NOW 🎟 Head to the link in our bio to get your tickets to #SharafatParwani, #BoredTeachers and #TheWashingtonBallet 🙌
When the sun goes down, our lights go up 💡 what show will you be here for?!
#Tootsie, the laugh out loud live letter to theater, is coming to @capitalonehall from Nov. 25-27 and @mattk313 from the cast has a special message for Tysons, VA 👋💬 Head to the link in our bio to get your tickets 🎟 + check out the Opening Act pre-show dining experience!
This Friday, 11/18, laugh with internationally-known comedian Derrick Tennant at the @helpingchildrenworldwide evening of comedy and inspiration. $18 Tickets @ Link In Bio #CapitalOneHall #Comedy #standupcomedy #Tysons #DC #NOVA
JUST ANNOUNCED ✏️🍎 The biggest entertainment platform for teachers in the world, #BoredTeachers, presents the funniest teacher-comedians in the world all on one stage and they're coming to Capital One Hall on April 1, 2023! Sign up for our newsletter to receive our venue pre-sale code for tomorrow 👀 general on-sale begins on Friday at 10A!
JUST ANNOUNCED 🚨 we're thrilled to have #SharafatParwani coming to Capital One Hall on Dec. 16! Tickets go on sale this Friday, Nov. 18 at 10A 🎟
Could it be we’re falling in love with this opportunity?! 🌟 @capitalonehall & @thewatermarkhotel have partnered up to offer you our Seat to Suite Experience! Check out #Tootsie coming to Capital One Hall from Nov. 25-27 & then elevate your Broadway in Tysons experience with a stay at the attached Watermark Hotel 👏 book at the link in our bio!